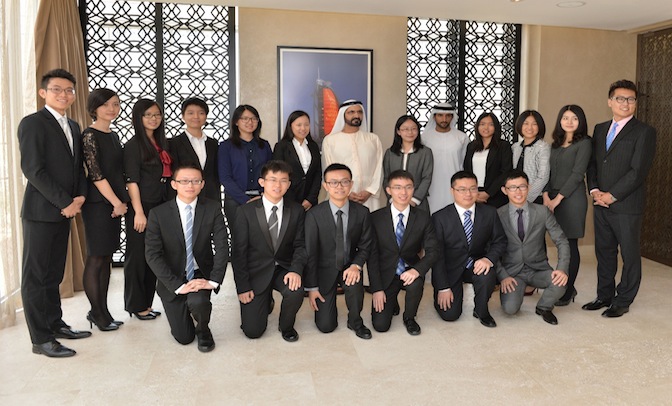 Dubai Business Internships provides platform for interns to become leaders of tomorrow with an opportunity to learn about Dubai’s role as a hub for tourism, trade and commerce

Seventeen outstanding Chinese graduates have been chosen as part of a new Dubai internship programme, aimed at giving them insight and expertise into doing business in the Middle East.

Dubai Business Internships, facilitated by Falcon and Associates, trains some of China’s most promising young talent on subjects including tourism, trade and commerce over the course of 10 months.

The interns will also undertake a 26-week placement to get real-life experience in the workplace, as well as training modules delivered by one of the world’s leading business schools, the European School of Management and Technology, and local service providers Capadev and Bon Education.

His Highness Sheikh Mohammed bin Rashid Al Maktoum, Vice President and Prime Minister of the UAE and Ruler of Dubai, welcomed the inaugural intake of 22 to 26-year-old graduates from leading international and Chinese universities, including South China University of Technology and Peking University, Sun Yat-sen University and Guangdong University of Foreign Studies.

Sheikh Mohammed offered a warm welcome to Dubai and encouraged the interns to dream big and to use the experiences and skills they gain throughout the programme to make a positive impact in the world, emphasizing that Dubai Business Internships has been designed to help unlock their potential to become the business leaders of tomorrow.

Beyond increasing employability, the scheme is also intended to highlight the culture of the United Arab Emirates to the interns, and there will be a series of cultural exchange activities to deepen understanding. Ties between the two countries have been strong since 1984 – when diplomatic relations were established – and since then the countries have helped each other with industries spanning from trade to entertainment.

These connections have meant that Dubai is now home to over 200,000 Chinese residents, while China was Dubai’s second largest trading partner in 2013 and is on course to become its number one partner for 2014 after $21.9 billion of trade in H1 moved China ahead of India into top spot.